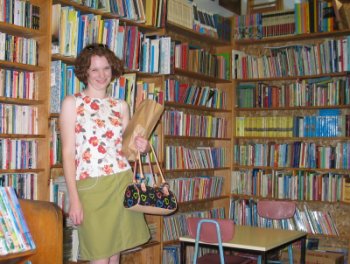 I should have known I couldn’t dislike a book by C.S. Lewis. But this country girl has never picked up a sci-fi. So I never would have read Out of the Silent Planet if my man hadn’t discovered the trilogy in my favorite used book store.

This book store is the kind owned by someone who loves books. (Such is not always the case.) The growing piles of books around the counter plainly state that he can’t say no to a book. There will never be enough room on his shelves for all the books he has there. Some of the sets have graced the shelves for years. I don’t think he minds if he never parts with some of them. But the treasure trove is that very mountain of books surrounding the counter. They are not sorted or priced, and you have to dig deep to even see a fraction of them. Therein lie the treasures like an old hardback mystery by A.A. Milne (I honestly didn’t know he wrote anything besides Winnie the Pooh!), an undated, unedited hardback of The Marquis of Lossie by George MacDonald, and the C.S. Lewis space trilogy.

When my man heard I hadn’t read them, he decided we should add them to our book collection. So he bought them and left them for me to read.

The night before I left for a friend’s I suddenly realized I had (once again) failed to pack reading material for my three-and-a-half hour flight. (Last time I didn’t realize it until nearly too late. I bought a paperback copy of The Hound of the Baskervilles by A. Conan Doyle at the airport bookstore, and devoured the entire thing on the flight. I bought a suitcase full of books at GoodWill before I flew home, just in case.) I grabbed the trilogy off the shelf, thinking maybe they would serve to keep my attention in an airport better than Wodehouse (I’m a people watcher).

Now I find myself reading about characters rather similar to Wooster and his pals, only displaced from the pubs of London. It’s a fascinating experience. A far cry from the enchanting land of Narnia. But a delightful read all the same.

I should have known you can’t go wrong with a C.S. Lewis book.