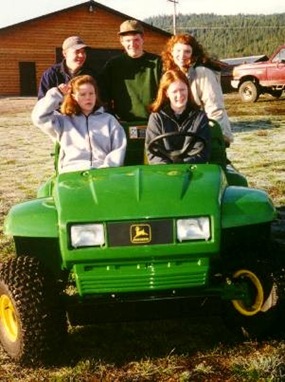 Can you believe that today marks 14 years since our families met?  We were just-barely-turned 13-year-olds.  We had no idea we would be meeting our future spouse that day.  But the God-ordained timing of the Riverside Geyser in Yellowstone National Park on September 30, 1996 changed our lives forever.

It was three and a half years later before we became Fred and Betty.  For some reason, your sisters thought your classic car was like that of Fred Flintstone’s.  (You’ve given it a lot of TLC since then!)  During that March 2000 visit, they dubbed you Fred and me Betty, not being familiar enough with the Flintstones show to realize they had the wrong people coupled together!

If the Lord tarries, we’ll be celebrating our fiftieth anniversary of meeting on September 30, 2046.  Of course, we’ll only have been married 40 years by then, but we like to celebrate lots of anniversaries!

Gretchen asks the right questions to find out what is wanted and provides suggestions if needed.