My maternal grandfather’s birthday is today.  It seemed a fitting time to share this piece I wrote ten years ago for a college writing class.  Happy Birthday, Papa!  Thanks for your example and all the memories. I love you. 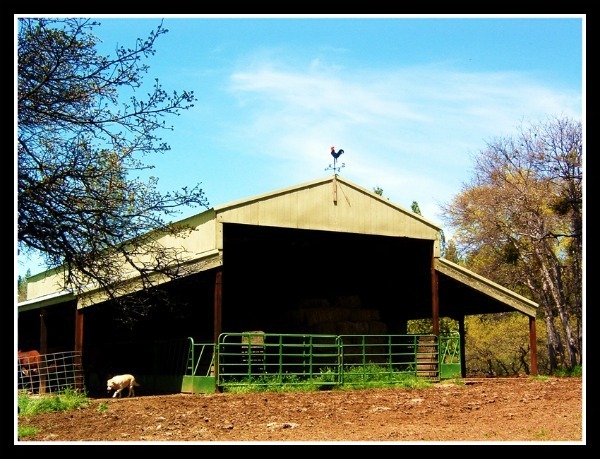 Stepping lightly over the hot wire fence alongside my cousin Melissa, I recall the day not so long ago when I could duck under the wire more easily. And as I step into the mucky barnyard, dodging more than just mud puddles, I begin a journey back in time. First I stop to gaze at the barn in front of me. The rooster weathervane stands atop the tin roof with its red head outlined against the blue sky, while the siding below is lightened to a tan by the sun. The metal gates enclosing the front of the barn were once bright yellow, but through the years the paint has faded and chipped away. I slip the rusting chain out of the catch and place my hand on the cool metal bars, swinging the gate open just wide enough to slide past it. As the drawn-out screech of the gate’s closing hinges echoes throughout the ranch, I step into the past.

It was a crisp but foggy morning in the late 1980’s. A casual observer along the road might have seen a six-foot tall man walking toward the barn, in green coveralls and a brown hat that advertised Ivomec. Four children traipsed along behind him. The oldest was Robert, a grown-up boy of seven, attired in faded blue jeans, a red sweatshirt, and the ever-present dirty baseball cap. William, four years younger, in a dark blue coat that added to his waddle, looked up to his older cousin as the essence of manhood. Five-year-old Gretchen hopped along in pink rubber boots right behind her brother. Bringing up the rear was a quiet four-year-old, Melissa Ann, with a long dark braid reaching halfway down the back of her purple coat.

The thin gray-haired man opened the barn gate, as the children ran past him to scramble up the neatly stacked bales. Robert reached down the post to flip a switch, and the barn was illuminated in a soft glow coming from light bulbs hanging high above the rafters.

Breathing hard as they ran up and down the hay bales, the children were enveloped in the familiar scent of cow pies, made sweet with the mixture of straw and alfalfa. Though never sold in stores, it is a pleasant perfume to many a man, including the tall rancher who now was ascending the steps of tightly bound hay bales behind the younger generation. Armed with wire-cutters, he was ready to feed the three dozen hungry Herefords who were loudly mooing their impatience in the feed bunks below.

Clip, clip. The fragrant alfalfa split into many flakes as he pulled up the baling wire and expertly bent it into a bundle that he stuck in his back pocket with the clippers. The boys were standing ready—Robert grabbed a flake and carried it to the edge of the haystack, dropping dried clover-like leaves as he went. He looked down at the feed bunks where steaming noses and drooling mouths were sticking through the green metal slats, and shouted, “Here you go, cows!” while the heifers below vied for the first bite.

In the middle of the barn could be seen a pair of once-pink boots, now covered in manure and straw particles, where Gretchen was lying on her back staring up at the rafters. Heedless of the straw now entwined in her long red braids, she breathed deeply to absorb the aroma, then sneezed at the dust. Each summer during hay time the bales were stacked to the rafters, but now the supply was depleted. A flicker who made his nest in the barn every year fluttered near the roof. As Gretchen lay gazing upwards, she began to count the mud dauber nests on the walls but ran out of fingers.

A meek “moo” from the other side of the barn reminded the girls of the big plastic bottles that had warmed their hands on the trip down the driveway. Two twin calves awaited them—each from separate mommies that had chosen to care for just one calf. Melissa didn’t mind, though. She loved the twice-daily ritual of feeding them. The little calves eagerly stuck their noses through the green bars of the Powder River gate, sucking vigorously on the bottles. It was all the girls could do to hold on, while the warm milky saliva dripped off the nipples onto their fingers.

Meanwhile, Robert and William followed the older man inside the barn as he expertly forked the alfalfa and hay throughout the feed bunks. This man they called “Papa” was not just a rancher, but also a veterinarian. Papa the rancher could pick up hay bales with ease. Papa the vet was concerned when a pregnant heifer or a young calf didn’t show up at meal times. And Papa the Christian showed his grandchildren how to work hard and do right as he went about his daily chores, imparting values that would influence the cousins the rest of their lives.

Melissa’s call awoke me from my reverie. I meandered down the hay bales that somehow looked smaller now. “Remember when we were little, Mel, how much fun we had coming down with Papa every morning to feed?”

Of course she remembered. Her life had been shaped in Papa’s barn even more than mine. We cousins will always share special memories of our time at Papa’s barn.