I tend to approach modern fiction with caution, even when it’s from a Christian publisher. As delightful as it can be to discover a new author, there’s nothing worse than starting a book only to realize it will be a disdainful chore to finish it. But the Price of Privilege trilogy came highly recommended from a friend, and the first book was free on Kindle. How could I go wrong? 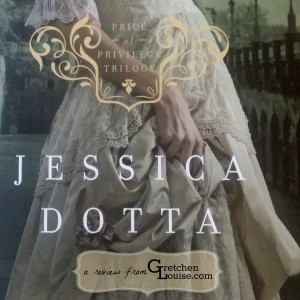 Jessica Dotta drew me in immediately with her first person memoir style of writing fiction. Reading more like a mystery than a romance, Born of Persuasion is a dark book, filled with death, depression, and desperation.

But then comes love–in many shapes and forms. Before the series is over, our heroine Julia Elliston has three men vying for her hand and heart. And unlike most fiction, you have no idea whom she will find herself with at the end. Not only that, but Dotta’s characters are painted so vividly that you’re not always sure which one you want Julia to end up with. My own youthful romance made me partial to Julia’s childhood sweetheart Edward, but there were times when I wanted to believe Chance Macy as much as she did. And then we meet Lord Dalry in Mark of Distinction. I didn’t like him at first, but before Price of Privilege was over, I couldn’t help myself: I was rooting for Isaac Dalry.

The Price of Privilege trilogy is the story of one young woman who grew up under the shadow of her parents’ sins, struggling to find a way out of the years-old web of deception. But in the end, Julia Elliston has to face the consequences of her own choices, and learn that delicate balance of accepting the responsibility for one’s foolish decisions while accepting the grace and mercy that is ours for the asking.

Though Julia is the daughter of famed atheist William Elliston, she has to come face to face with faith and the lack thereof. Themes of trust and sacrifice are shown more than they are discussed, and you put the series down knowing a lot of healing and forgiveness had to take place between the lines. Even the heroine admits to being left with her own questions of what really happened in some of the situations, making the reader realize you’d have to re-read the entire series to catch all of the hints that led to each of the events that took place.

Not a series for younger readers, there is a reason the reviews of Jessica Dotta’s books use words like “evocative” and “dark”. While “clean” in the strictest sense of the word, there were passages that seemed more descriptive than some of my single friends would want to read.

While the author’s bio references the humor of Jane Austen, I felt her writing more reflective of the shadowy dramas of the Bronte sisters. But in another way, her strong characters and intriguing story line reminded me of the depths of George MacDonald’s novels. Jessica Dotta will be an author I recommend, with caution, to my friends who like deep, dark fiction and aren’t afraid of a few slightly risque scenes.

Read the Price of Privilege Trilogy:

Disclosure: I received a free review copy of the third book in the series, Price of Privilege, from the Tyndale Blog Network.

Gretchen’s quality and speed of work, combined with affordability, seemed a little too good to be true, except it wasn’t.