Seasons change.  Siblings grow up.  People get married.  School and jobs and marriage take siblings all around the country.

Not too long ago he was my baby brother who I took delight in dressing in different outfits and taking pictures of and having as my personal baby Jesus in the Christmas plays.  Now he’s a teenager and running marathons I don’t get to see.  While my girls name their dollies “Baby Caleb” after him, preferring to call him “Uncle Cake.”

Once she was my little sister whom I was forever babysitting and bossing around while I made dinner and trying to make her grow up too fast.  Now she’s almost sixteen but she looks at least eighteen and she knows more in her first year of high school than I ever learned.  She makes me take a nap while she fixes my dinner and promises to potty train my daughter. 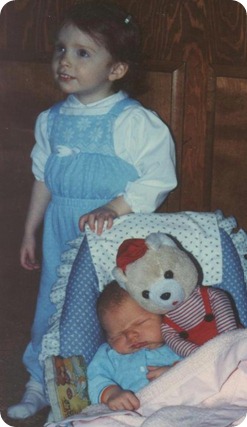 Gone are the days when I was his photographer for TeenPact campaigns and senior portraits, when we best-friend siblings were mistaken for boyfriend and girlfriend, when we rode to college classes together.  Now he’s married to an amazing and articulate Southern girl, winning moot court competitions that I don’t get to see, studying for the Bar, and graduating from law school (today!) without me being there.  While I sit here doing laundry, changing diapers, and holding his first nephew—a spitting image (at least in my memory) of my chunky baby brother who stretched so far off my lap when I would get to hold him.

Siblings grow up.  And sometimes, we don’t realize how special they are until we don’t get to see them all the time.

Seasons change. And sometimes, we don’t realize how precious the last season was until we’re in the next one.

Lord, help me to live in such a way as to have no regrets when seasons change again…

The entire process was incredibly efficient and Gretchen’s services were worth every penny.