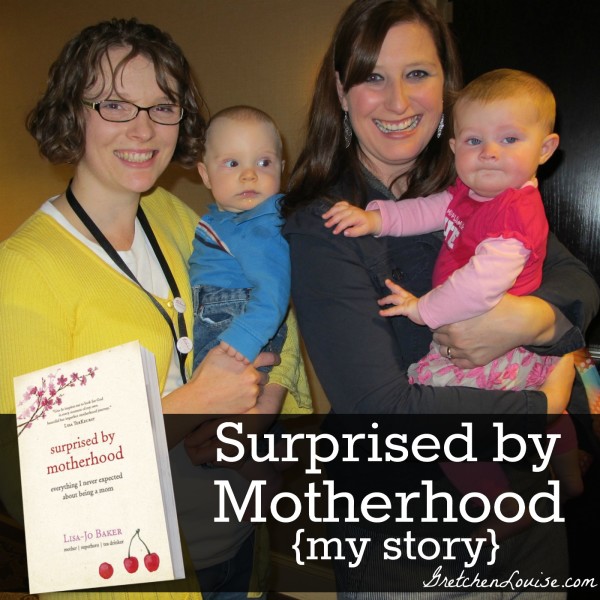 I didn’t expect to be surprised by motherhood. My little sister was born when I was almost 12. My baby brother followed 3 years later. I was an old pro at changing diapers and cooking dinner with a baby on my hip by the time the baby I was juggling was my own.

I knew it would be different actually being the mom instead of the big sister. But I thought I knew what to expect. I thought I understood how much having a child was going to change my life, our life. And in a few ways, I probably was better prepared than some girls who haven’t helped raise siblings and babysit cousins. But in other ways, the very fact that I thought I knew what I was getting into was probably the reason I found some things so very surprising.

I was surprised to have one child that followed everything the books said–followed by two who didn’t. If our firstborn had been an only child, I’d have smugly thought (for a year or two, at least) that I had motherhood figured out. Sleeping through the night from early on, I could set the clock by her wake/eat/play/sleep schedule. She quieted the moment she was swaddled and was potty trained at 10 months. And then we had our second. Who has never slept well a night in her life. And is so stubborn that everything is a battle. Followed by the third who had medical and dietary issues who made everything about his babyhood a challenge. I wish I hadn’t been so quick to judge other children by my first.

I was surprised that the discussion of parenting methods could become so dogmatic and emotionally draining. I suppose that ever since the Old Testament our offspring has brought out the “mamma bear” in us all. But I never imagined that in my eager and excited sharing of “this is what worked for us” I would enter into the fray of parenting style debates. Nor could I comprehend the way the pit of my stomach would feel when I read equally sure opinions from both sides by the time I was babywearing and nursing around the clock with my third child. I wish we could discuss the ways we comfort and care for our babies without becoming prescriptive. I wish we could grant as much grace to other mothers as we ourselves need.

I was surprised by the fear that so quickly gripped my heart at the simple thought of my heart walking around outside my body, without me being able to hover every second of every day and night. I knew how prone I was to fear for my husband–and he was a grown man able to take care of himself. But almost losing him two months after we got married had taught me how precious life was. And when it came to babies, the stories of friends’ miscarriages, infertility, and struggling little ones brought the truth home even more. To deliver life is to give birth to pain and the potential for loss. I wish that when we share our stories of motherhood we would help birth trust and peace in each other.

I was surprised by the fact that it wasn’t easier to be patient and loving when the children I was caring for were finally my own. I’ve never been a patient person, but I thought the natural mother’s love I would feel for my own children would make up for my lack of forbearance. God does give an extra measure of grace to mothers; I know He does. It’s the only way we can survive on so little sleep. But I’ve learned that there’s no shortcut to being a patient mom. It’s moment by moment leaning into grace. I wish I’d understood that I would need grace for my children and even more patience with myself in my journey of motherhood.

Lisa-Jo Baker’s book Surprised By Motherhood releases today. Throughout its pages I laughed for the memories and I cried for the lost moments and I healed from the hurts. I wish every mother and daughter could read this book and together embrace the surprises of motherhood.

Head on over to Kindred Grace to read my review and enter for a chance to win your own copy!

Words About These Words

Gretchen is so knowledgeable, helpful, and quick to respond to even the quirkiest of my requests. I truly enjoy working with her.