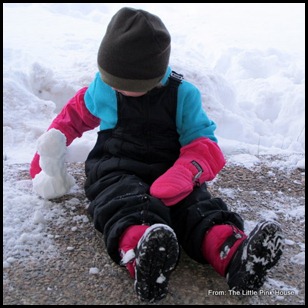 You’d been wanting to build a snowman for months, ever since you knew snow was coming. You heard me mention something on the phone about getting something finished outside before the snow flew and you were talking about the snow flying.

A green snowman was your plan. I had visions of a snowman with grass clippings stuck all over him—much like the pitiful snowmen I made growing up, in the land where there was much green grass and little if any snow.

But the snow came, and with it such bitter cold temperatures there was no way I was letting you outside. I finally did—only to have you come crying to the door two minutes later because, “The snow hurt my hands!” You’d taken off your mittens and touched the snow and found out how very cold it really was.

Your daddy had promised to build you a snowman when he had time.  But it was awfully cold for building snowmen when our snow first fell!  Finally, one Sunday when it had warmed up a bit, we told you that if you took a nap, you could build a snowman afterwards.

You bundled up excitedly even as your daddy was saying he wasn’t sure it was going to be very easy to build a snowman with the dry snow. But try he did. And you were thrilled with the baby snowman he made—three snowball sized snow balls stacked on top of each other.  It was a teeny tiny snowman, but about all that could be made with the snow he had to work with.

We keep promising you we’ll build another when the snow gets a bit more wet. Perhaps the freezing rain in the forecast will make that possible.  But you were quite happy with your baby snowman (who has since melted, since he was sitting on our patio) and talk about him frequently.

Your latest snow project is “cooking” with snow, with the bowls and spoons I let you take outside.  (One has to have something to play with in the snow!)  But on the bitter cold mornings, when I tell you it’s too cold to go outside, you look out the window and say, “I want the sun to come out so I can cook more snow!”  Your latest snowy line really made me laugh: “I want the snow to warm up!” 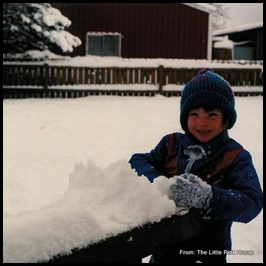 Meanwhile, your mommy recalls a long ago day, when I was a little girl.  By some miracle we got a lot of snow, and your Uncle Will and I decided to collect it in buckets and wheelbarrows, where it would melt and be water for “emergencies.”  As if we ever lacked water in that part of the country!  Oh the joys of snow and childhood!

I love you, Ru.  Let’s try to build another, bigger snowman before the snow melts, okay?  Does that “sound like a good plan”?

Lots of love,
your mommy

Working with Gretchen is a delight.