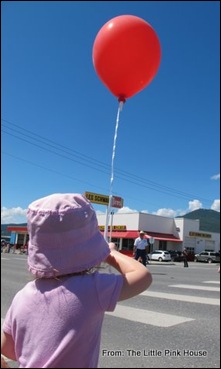 On Saturday, you went to your very first parade.  You were in awe of the fire trucks and sirens.  You adored the little cars.  You were mesmerized by the horses.

But what made your day was the red “babboon.”  You’ve been talking for months about how you wanted a balloon for your birthday party.  And we’d been promising one for that far away November birthday.  But this Saturday in June, sitting on the sidewalk of Main Street, a whole bouquet of red balloons came walking toward you.  And oh how excited you were!

We tied it to your wrist, so it wouldn’t fly away.  You hardly let it out of your sight for the rest of your day.  (I even tied it to the rail of your toddler bed while you fell asleep.  Don’t tell your grandmothers!)  You were so very excited to have a balloon just like Pooh.

You loved the candy, too.  At first you just watched it fall and only went to get some when told.  But soon, you were jumping up as soon as the candy was thrown, balloon on your wrist, toting your little bag (courtesy of Les Schwab Tires), filling it with more candy than you’ve ever seen in your life. 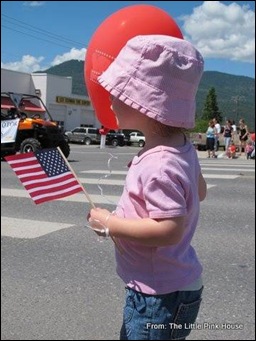 And then, to top it all off, you got a flag!  Can life get any better than flag-waving and balloon-holding?  You didn’t think so!

But your parents knew the inevitable life-span of a “red babboon.”  So we reminded you of the story of Eeyore’s birthday.  The red balloon that was to be Eeyore’s gift from Piglet got tripped over and popped.  It became a “small damp rag” that went in the empty honey pot from Pooh.

And then there was the balloon Pooh used to trick the bees.  That was a blue balloon.  And the first time since your fascination with wanting your own balloon that you paid attention to that video at Aunt Katie’s, you had burst into tears when Christopher Robin shot Pooh’s balloon down.

So we talked about it over and again, the facts of the life of all babboons.  You spoke with excitement about the fact that sometime your babboon would pop and become a small damp rag.  You were okay with it.

Your red babboon had an amazing life-span: from Saturday morning until Monday night!  Uncle Mason, Aunt Mouse, and cousin Abbie were over for dinner.  You were playing with your babboon.  We all noticed its gradual shrinking.  And finally, so did you.

I reminded you that it was on its way to becoming a small damp rag.  That didn’t help.  You dissolved into tears.

But because of the way they’d inflated it, your daddy knew he could blow it up again.  He offered to fix it, and you were thrilled. 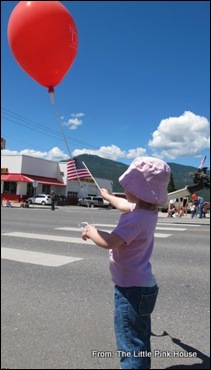 Until suddenly, POP!  Just like Piglet’s balloon, yours popped.  It had been too weak at the stem to stand being blown up again.

You cried.  You bawled.  You yelled.  “My babboon!  My red babboon!”  You were quite upset.  Not so much with Daddy, but with the balloon popping.  Though you did come to Mommy for comfort.  (Daddy was definitely forgiven later that night when you got out of bed once again to find him sewing Piglet’s ear back on.  He’d been afraid of a second tragedy in one night, so was attaching the ear that was about to fall off Mary’s stuffed Piglet!)

It was traumatic.  You couldn’t sleep for crying about your red babboon.  Even when you finally dropped off from sheer exhaustion, you woke up crying a few more times until well past 11 o’clock that night.  Your only comfort was that Uncle Mason was going to find a balloon at Nanna’s house for you the next day.

The first words out of your mouth as you walked through your bedroom door the next morning were: “Mommy I ready to go to Town to take Abbie to the airport and get a new babboon.”

I tried to explain that were weren’t going to get a new balloon in Town.  But you were planning on it.

At least the tears had been replaced by excitement.  The sad story of the previous day was summed up in your adorable little voice telling us that “my babboon is a smah’ damp rag!” like it was the greatest thing that could have happened.

By the time we got to Nanna’s house to pick up Abbie, you were telling your story to everyone.  Nanna dug around in the basement and found some of the desired objects.  But we told you that if you were good you could have a balloon when we got back to Nanna’s house.  (Yes, I bribe you once in a while.)

It hadn’t taken you much time after owning a red balloon like Piglet’s to wish you had a blue one like Pooh’s when he was trying to fool the bees into thinking he was a little black rain cloud.  So you were pretty sure this time around you wanted a blue babboon.

Thankfully, Nanna had found such a balloon in her basement.  And when we got home from Town, Uncle Mason blew it up for you.

You were so thrilled you forgot your usual politeness.  Daddy took the balloon away from you until you could tell Uncle Mason thank you.  You finally gave him a hug and said thank you.

And now you are the proud owner of a blue balloon.

But we’re reminding you frequently that just like your red balloon, this one, too, will at some point in time become a small damp rag…

Oh Ru, you and your babboons keep life interesting!  We love you.

P.S. For your birthday, I’m going to get you one of those metallic balloons that won’t pop!

Working remotely with Gretchen was straightforward and simple. The most difficult thing I did was make decisions.