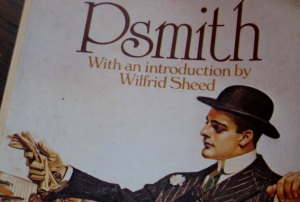 If you’ve never met any of P.G. Wodehouse’s characters, then let me start by introducing you to Psmith.  He used to be in fish, he conveniently borrows other people’s umbrellas, and his latest venture is pinching necklaces.  At the moment, he’s posing as a poet, even though he can’t understand a line of the poetry he’s supposedly published.  And oh yes, the P is silent (just in case you wondered).

Wodehouse creates characters and love triangles (or more often, quadrangles!) and intricate, confusing storylines like none other.  The British humor might be a slightly acquired taste, but it’s one my husband and I have enjoyed time and again.  Wodehouse is an author we pick up in the long winter evenings, for reading aloud or reading alone.  Or, like in the case of Leave it to Psmith, I read much of it over my husband’s shoulder before I decide to read it for myself!

I didn’t realize when I read it that Leave It to Psmith was actually the last of the Psmith adventures to be recorded by Wodehouse.  But since I was already slightly familiar with the Blandings Castle characters, Leave it to Psmith connected them all for me, albeit in a backwards manner.

I have to say that I missed the presence of Jeeves in this Wodehouse story.  But Psmith’s ingenuity and creativity is of a similar strain.  Psmith, however, definitely relies more on crime and conniving than Jeeves would recommend, seeing as how Jeeves can always predict the dastardly outcome of such proceedings.

Despite Jeeves’ absence, I think Leave It to Psmith is still one of the best works of P.G. Wodehouse I’ve read to date.  (And ever since a certain boyfriend of mine introduced me to this author, I’ve read quite a few of his classics!)  It also could win the prize for most confusing storyline ever.  Yet, as always, Wodehouse actually brings it all together in the end—and as always, it’s hilarious to see exactly how he does so!

When Pen Pals Become Lifelong Friends (a review of Anonymouse)

The Best Inspirational Historical Fiction About America in the 1920s & 1930s

I trust Gretchen implicitly! So glad to have her help with the tech stuff I don’t understand.